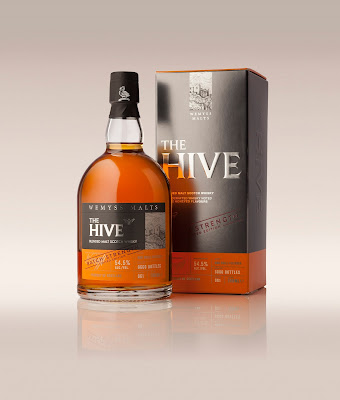 The independent bottler Wemyss Malts recently released three new blended malts to add to their range. The Hive, Spice King and Peat Chimney as we all know and love but now out as a limited edition at batch strength. These blended malts have been blended from a selection of casks of single malt whiskies from over 10 Scottish distilleries. Suggested retail prices are between 45 to 50 pounds per bottle. First one to have a closer look at is the The Hive, bottled at 54,5%, non chill-filtered and 6000 bottles in total released for batch #001.

On the nose I find it to be honeyed, but that was maybe to be expected right calling it the Hive? Green apples and orange juice, grounded pepper, toast, cruesli cereal, vanilla and some dried fruits pop up together with a toffee like flavour in between some pastry notes and herbal tea.

Waxy sweet honeycomb, toffee, black pepper and fruit sweetness on the palate. The green apples from the nose make way for red crunchy ones with a thick sticky layer of toffee on them. At first the strength of the dram is coming through very clearly but after that it softens up quickly into a nice mixture of baking spices, freshly baked soft sweet bread, sponge cake, tutti frutti, dried fruits all over the place, raisins, vanilla, oranges, pomolo, toast, bananas and even a hint of pear juice. A good length finish that leaves a sweet honeyed vanilla mouth feel with just a touch of some warming spices and ginger bread. A balanced and enjoyable dram with a good strength to it! Thanks Wemyss for sharing a sample of this new expression!
Email ThisBlogThis!Share to TwitterShare to FacebookShare to Pinterest