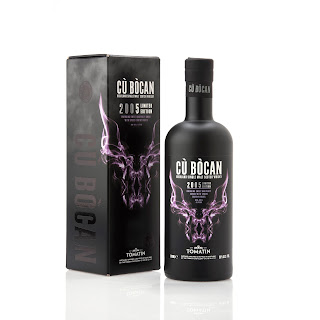 From Tomatin recently a limited 2005 vintage edition of the peated Cù Bòcan single malt was released at a strength of 50% after maturing in ex-Bourbon and Sherry casks. As with the previous editions the Cù Bòcan brand is named after a mythical Highland hell hound which was rumoured to haunt the village of Tomatin. It is a lovely expression with something different then what I normally find in Tomatin whiskies. Curious to read what I found in the other expressions? Have a look here to also read about two other Cù Bòcan expressions.

On the nose I detect some light smoke notes and sweet fruits mixing together with creamy vanilla, sultanas, mocha, ginger, toffee, red apples, banana, blackcurrant jam and soft spices. The palate has some soft sweetness of forrest fruit jam to me together with honey, apple red skin, vanilla, white pepper and light note of herbs in the back. Short to middle length finish with notes of chocolate malt, coffee and fudge. Scoring me an 7,5/10 but that is just due to the palate and finish to me could have been just a bit more stronger... Lovely dram again but the Cù Bòcan 1989 still keeps to be my favourite so far. Thanks Tomatin for sending over a sample to nose and taste! Cant wait to see what more will be released in the future!
Email ThisBlogThis!Share to TwitterShare to FacebookShare to Pinterest