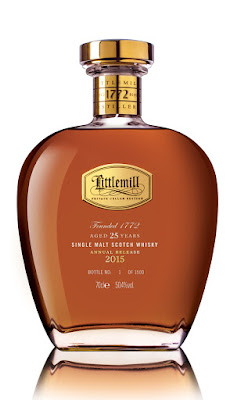 From the Loch Lomond Group comes this Littlemill Private Cellar Edition 25 years old. The Littlemill distillery stopped production in 1992 and dismantled in 1996. In 2004 much of the remaining buildings were destroyed by fire. The roots of this distillery go back to at least 1772, and maybe even to the 1750's.

For the first Whisky Flash Blog hosted by The WhiskyWire they asked to post something on the 14th of October by using #Littlemill. Sadly the sample did not arrive till the 15th so just missed all the fun. But it was very lovely to read all the interaction and posts from others yesterday and their thought on this expression. Have a look for them on the social media by searching #Littlemill

It is a limited release of 1500 bottles that will be available from specialist retailers for around 2000 pounds. So you can imagine the relief a bit when this was lying on the doormat when coming home from work today. There was a nice leaflet included with some information on the distillery and this bottling.

On the selection of the whisky they can tell us that the two master blenders John Petersen and Michael Henry looked through the remaining casks of 1989 and 1990 in their warehouse, and from that selected 10 which they believed, after married together, best represented the quality and style of whisky from the Littlemill Distillery. After being distilled in December 1989 and April 1990 it was matured in a mixture of American and European Oak casks and has had a period of finishing in 1st fill European Oloroso Sherry casks. Bottled at 50,4% in 2015.

I have tasted a lovely 25 year old Littlemill expression before of Douglas Laing distilled in 1988 and bottled in 2014. Curious to see what the differences are between these bottlings. Lets start exploring!

Nose
Sweet creamy honey and a little bit of hay. Hints of red apple, vanilla, toffee, mango and warm pineapple. Cinnamon, aniseed, hint of salt, raspberries, black current and rich rum soaked sultana's. Getting a feeling of a hot chocolate with marshmallows by a crispy warm fire. Some malty notes coming forward through the sweet fruits and rich fruit cakes. The longer you let it sit and breath the more it develops.

Palate
Wow, from a soft and lovely nose, you are hit with a wave of pepper and warm spices, bit dry clove note in there, but it does not disturb the soft fruits and warm honey. There is a strong flavour when sipping for the first time of grapefruit and oranges. Almost making me think of some molasses after the citrus notes faded away. Some macademia nuts and walnuts come to mind also. After a few nips the sweetness wins it more and more of the harsher citrus and clove/woody notes.

Finish
A good length finish, warming and feels balanced. Warm rhubarb, cocoa, little bit of chocolate and creamy vanilla sauce on the end of it...

Score
How to score a whisky like this? Price wise, it will drop down the rating far down for sure. But it is a very nice whisky and I have to restrain myself to leave some in the bottle for Thomas to review it when he comes home from work. Because it just keeps getting better with each sip I take. It feels complex and keeps developing. But, holding this bottling against the Douglas Laing that I tried before that if I am not mistaken went for about 170 pounds? Then purely on the taste it would be the same rating. But due to the price attached? I would choose not this one, even if it is a beauty.

Thanks Steve and Loch Lomond Group for giving us all the possibility to try this out and enjoy a great dram together!