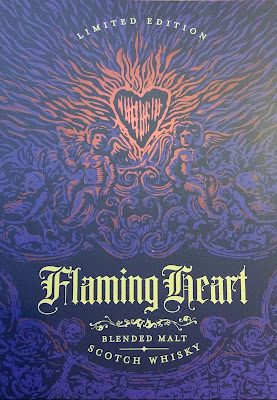 A bit back I was lucky to receive a sample of a previous edition of the Flaming Heart to have a closer look at it. Now with Compass Box celebrating their 15th anniversary since their 1st ever bottling, they have not only released 'This is not a luxury whisky' but also this 5th edition of the Flaming Heart. Below, before I will tell you what I found of this one, a bit more information of what they can tell us all about it.

Scotland’s leading independent whisky maker and five-time Whisky Magazine Innovator of the Year, Compass Box continues its fifteenth birthday celebrations with a new release of one of its most sought-after Limited Editions: Flaming Heart.

First created in 2006, Flaming Heart was the first ever whisky to combine the rich, complex spice of Scotch aged in new French oak with the evocative peat-fired smoke of Islay malt. It created a genre-defying style that was smoldering, spicy, complex – and so popular that it quickly sold out every time it was released. Commenting on the decision to release a new batch of this sought-after Limited Edition, Compass Box founder John Glaser stated:

‘Flaming Heart was one of our break-through whiskies. This product was about being brave enough to create an entirely new style of malt whisky – we knew there was a risk but the style was so delicious that we believed in it and in the end it has become one of our defining products. People still talk to me about Flaming Heart today, still ask when the next batch is coming out. So as part of our fifteenth anniversary celebrations we wanted to re-release this cult Compass Box classic.


A marriage of three parcels of malt whisky from Highland and Islay distilleries, Compass Box has once again taken the highly unusual step of revealing the precise age and sourcing of every cask that went into Flaming Heart. Commenting on this decision, founder, John Glaser stated:

‘In celebrating our fifteenth anniversary we wanted to re-visit a classic Compass Box style without simply replaying it. The whiskies we’ve used for this release hold true to the original concept of Flaming Heart but are significantly older than any we’ve ever used for this whisky before. Age does not mean everything, but in this case, given the whiskies we’ve sourced, it adds depth, complexity, and richness and has allowed us to create something really special for our fifteenth anniversary. Of course, older whiskies add cost, which is why we feel it’s important to share the details on the ages of all the whiskies in a product such as this, so our customers can make an informed decision about the value it offers. We’re proud of every drop that’s gone into this whisky – and delighted by the end result. In many senses, this is the Flaming Heart we always wanted to create.’ 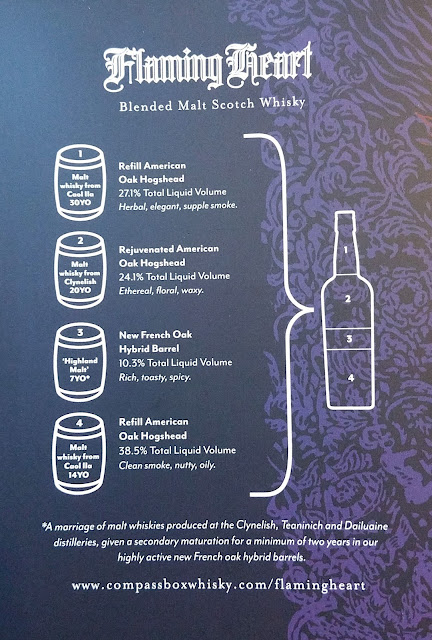 Compass Box’s detailed sourcing information reveals that just four parcels of whisky were used to create Flaming Heart: 30yo and 14yo parcels of Islay malt whisky distilled at the Caol Ila distillery were blended with 20yo Highland malt whisky from the Clynelish distillery – and a further proportion of Blended Highland malt aged on new French oak. Describing the thinking behind the recipe, John Glaser commented:

‘Blend recipes like Flaming Heart show that you don’t always need lots of component whiskies to create complexity; it’s down to the quality and depth of your components, and in Flaming Heart, every cask is amazing in its own right. Unlike many large commercial bottlers, we’re not looking to draw on tens or hundreds of parcels of whisky to create a middle of the road flavour. Instead, we’re interested in developing a simple marriage that allows each individual component to shine. With Flaming Heart the complex interplay between spice, sweet and smoke characteristics comes through a deceptively simple combination of French oak, Highland malt and Islay peat.’


So lets see what I found in this dram? On the nose I found it to be a bit meaty and reminding me of a good campfire where meat was slowly roasting. There is vanilla and some other bit hidden sweet fruit notes going on in here. A bit salty seaweed maybe also combined with red chili peppers? It gives me the feeling of dense herbal, liquerish and ginger nose that is combined with oranges and a warm thick blackcurrant sauce. It took me a while to get through the nose, it seemed not to want to open up to me.

The palate was more welcoming for sure with the sweet, spicy and thick creamy notes. Cherry, gingerbread, plums, herbal notes and an almost meaty BBQ flavors set combined with chili flakes coming to mind.  The creamy becomes more waxy towards the good length finish and develops some dark honey, spices, banana, apples, elder flower juice, raspberry and strawberry.  Mixing that in with some dark chocolate and powder sugar and vanilla creme makes this a balanced, complex and full dram that I scored an 8,5/10. Just a bit higher then the previous one tasted. It seemed to be a bit more complex.