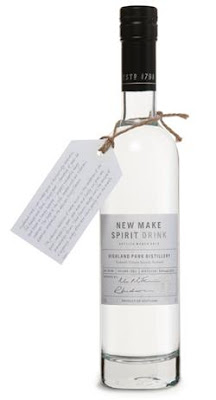 Back in 2014 I made some notes on the new make spirit of Highland Park that Daryl Haldane send over, bottled at 50% and distilled in February 2010. Now being 2016, and just having visited the distillery a chance was given to taste the new make at 69,7% and see how it compares to my earlier notes.

At 50% the nose has malty and grassy notes combined with dates and tobacco. I found it to be a bit dense on the nose. Coriander, clove, dark liquorish and green herbs. At 69,5% the nose gave me a feeling of heather in full bloom and warm vanilla. Liquorish again with sweet apples, dried fruits, creamy and a good malty note. Loads of the same notes only a bit more vibrant and present.

Moving to the palate I found it before at 50% to be filled with all kinds of berries. Red berry, gooseberry, cranberry, black current... Some liquorish and ginger bread, heather, woody herb notes, thyme, honey, cinnamon, apples and some lemon. The finish had a bit of sweet apple juice finish, with a hint of cinnamon dryness in it. Middle length finish, it ends a bit in a creamy lemon cheese cake.

Tasting it now at 69,5% it gives me the same #nomnomnom feeling I had in 2014. Just like the nose it is fuller and the notes are more present, more richer. The bottle given back then by Daryl has been shared around on many occasions and enjoyed very much. Love diving into new make spirits and seeing the basis of the expressions before maturation makes its mark on it.
Email ThisBlogThis!Share to TwitterShare to FacebookShare to Pinterest