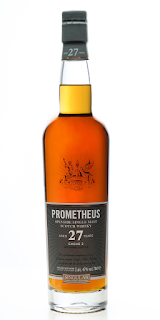 From the Glasgow Distillery a sample was provided of the Prometheus 27 year old bottled at 47%. They gave the following information about this whisky:

Prometheus is undoubtedly best remembered today for his great gift to man: fire. When an angered Zeus took fire away from man, Prometheus rebelled against the ruler of the gods. He captured a flame from the hearth of Mount Olympus and carried it back to man, hidden in a giant fennel stalk.

Today, the spirit of Prometheus lives on as champion of man and bringer of fire. In 1988 one of the Olympians of Speyside created a new form of malt: a whisky that combined the peaty fire of the Islands with the rich, bright, complexity of the Highlands. Like all great malts, time was needed for this new Titan to build character and maturity. But as the young whisky lay sleeping, hidden from expectant eyes, the heavens shifted.

The whisky’s creator departed and a malt that was both sophisticated and powerful was seen by some to be a threat. Protectors of the orphan Titan kept him solitary and hidden until, in the summer of 2014, they met in secret to arrange his release. Prometheus could walk free on two conditions: he could never reveal from whence he came and he would be mortal, destined to live a short, but glorious life.

So we give you Prometheus. A legendary Speyside with the Titanic strength of barley malted by burning peat. A whisky of sublime sophistication and balance, bottled at the peak of its powers. A Single Malt Scotch Whisky of secret origins, available in the most limited quantity for just one moment in time.

Lets dive in to this one and see what I can find. On the nose I find lots of sweet and warm notes. Creamy chocolate mousse, red apples, banana, figs, ginger cake, baking spices, cinnamon buns, hint of marzipan, candied oranges, lemon peel strips, raisins, breakfast cereals... Getting hungry now while typing these notes...

Palate is a lot like the nose and also sweet and warm. Showing a honeyed and rich palate with notes of fudge, sponge cake, raisin, vanilla, dried fruits, notes of chocolate and crunchy cereal.

The good length finish is a creamy and sweet one with notes of vanilla pudding and red summer fruits on top with strawberry juice. Scoring it an 8/10. Like it. Sadly for around £549 it is a bit out of my price range... Thanks Glasgow Distillery for sharing a sample of this whisky!