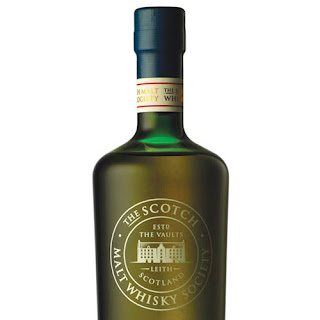 SMWS bottling 39.94 An Exotic Privilege is an 23 year old whisky from the Linkwood distillery. Distilled at 29.10.1990, matured in a refill hogshead and 196 bottles filled at 44.7%. My previous note was on a SMWS bottling also called 39.92 Dessert Wine and a Smoking Jacket from the Linkwood distillery, distilled on the 29th of October 1990, matured in a refill hogshead and 23 years old. But that one was bottled at 49,5%. It is fun to see these two side by side, only really the strength different it seems.

It is certainly a fruity nose like the 39.92 but loads of more notes of apple, fudge, vanilla, toast and granola. At the 39.92 the marmalade and ginger made it more fresh also, where as the 39.94 has a more sugary sweetness to it and feels "lighter"

Tasting it I get the red apples and fudge notes very strongly that are on the top of it all really, with maple syrup and honey around it. Getting some ginger cake notes now also and banana, oranges, clementines and cinnamon. Les red fruit and liquerish notes going on in here for sure if you look at the 39.92 notes. This one has some more (harder) lemon freshness almost with some cherry? Funny how this works setting them next to each other like this. You can feel that there is a mutual basis for sure, but they are different also. Scoring it an 7,5 out of 10.