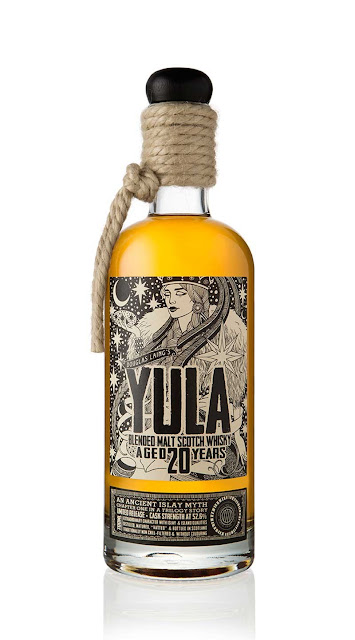 From the people at Douglas Laing a sample of the expression called Yula was sent over so we could taste the first chapter of the trilogy. It was distilled in 1995 and bottled in 2015 at 52,6% cask strength. This is what they can tell us about it...

Douglas Laing’s Yula is comprised of several of the Islands’ most sought after, peated malts. To be released consecutively in three limited edition batches, the first of which is bottled at 20 Years Old, Yula charts the spirit’s journey and celebrates the Laing family’s own proud origins on Islay. Just 900 bottles of Yula’s First Chapter are available globally.

On the nose I am getting at first some light peat and red cabbage with apple notes. Soft notes, floral and soft lavender mostly after that. Light floral soapy note with also some roasted ham and rich vanilla. Coastal notes mixing in with soft clover honey and smoked paprika powder, seaweed and raspberry. Some fudge sweetness also but nothing is overpowering not even the charred and smoky peat notes. With a hint of fresh mint and citrus running through it it is quite soft on the nose.

This all continues on the palate and makes it quite balanced. Yes the smoky sweet notes get stronger, with honey glazed ham and some floral soapy notes again with the vanilla and charred notes. But nothing that comes to the front really. The finish I can only describe as soft and not too long sadly, but gives a hint of dried fruits between the dry smoke that is left on the teeth.

Tasted it at a festival recently and remember it to be much more fruity then the notes I am getting now. Now it is more clear on the soap, smoke and earthy notes, but still sweet and fruity underneath. Bit still too soft and soapy maybe for me a bit, so scoring for now an 7/10. But think I will make another attempt at tasting this one at the next festival and update my notes see what I can find. Thanks for sharing the sample Douglas Laing, looking forward to see what the next releases in the trilogy will bring!
Email ThisBlogThis!Share to TwitterShare to FacebookShare to Pinterest