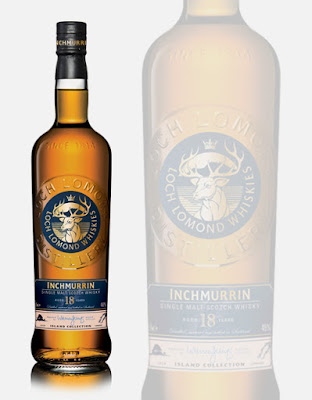 Recently I participated in the #InchmurrinWhisky Twitter Tasting where the 18 year old was in the line up. They can tell us the following about it:

Inchmurrin Whisky is distilled in the unique stills that give the whisky its light floral and grassy notes. As whisky has been aged in wood for 18 years it brings out sweeter more woody notes from the character of the casks. During that period Tommy Wallace was our master cooper, he was responsible for selecting the best casks in which to lay down this wonderfully characterful liquid.

The enchanting Isle of Inchmurrin is the largest of Loch Lomond's islands and was once home to a chapel built by Christian monks in the 7th century. Known as the 'Grassy Isle' it is soft, rounded and wonderfully wooded attributes sought after in many a malt. Large enough to support a small community, Inchmurring lends its name to three distinctive whiskies in the island collection. Each unique, but all sharing the characteristics which make this range beautifully different.

On the nose, well, did someone say play dough? When looking past this note you can find a thick, complex, a bit earthy and meaty nose. It develops into dense hay notes with thick chocolate/cream cake roll. Dark berries, cream, vanilla, wood shavings and dark Asian mushrooms. Feels like an forrest in autumn, sweet on one side but also densely packed notes like hard grass and heather. On the other side I am getting peaches and dough, red apples, plum compote and a thick meaty gravy that is made with juniper berries. Giving this one time it shows also some marzipan, cocos and honey suckle.

Moving on to the palate I get many notes from the nose also here but mixed with a strong almost citrus / pine freshness. After that fades away a bit there is a wave of sweet and fruity notes like cherry, lavender, chocolate, vanilla, raisin, banana, red apple, toffee, plums and figs. On the long finish I find dark chocolate and some tobacco that end in a slight bitter note, but not to overpowering. Scoring this one an 8,5 out of 10.