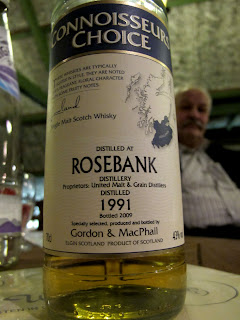 The end of 2014 at a great tasting with van Wees I had the chance to taste this 18 year old Gordon & MacPhail bottling of Connoisseurs Choice from the Rosebank distillery. This whisky was distilled in July 1991, matured on refill Sherry and American casks, and bottled at march 2009.

Now, just over a year later Werner gave us a sample of this one. In 2014 I wrote my notes of the tasting and now another chance to sit down with it for a bit and see how I now look at it... First my notes from last year. 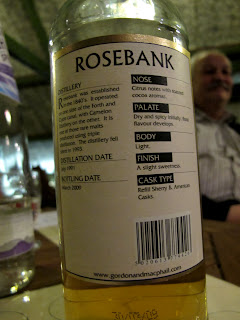 First some sweet fruit with light barley notes, bit floral and dark fruit jam. When the glass was a bit warmed up it revealed also some notes of a bit nutty kind. It was a bit creamy with some spices of red & black pepper, vanilla and some soft leather in the back.

After waiting a bit it also showed some more heavier floral notes, almost heather mixed with some darker Asian spices. But underlying there is a sweet layer of vanilla, custard, some shaved almonds and cream.

Palate
Sweet and liquerish at first mixed with warm spices. Made me think of cinnamon buns and dark fruits, hint of dates and cocoa powder. The notes from the nose come back lovely with especially the taste of dried sweet fruits, red apples and some cherries. There is some heavy forest fruit jam and blackcurrant juice note weaving through it all. With some more time the fresher notes also made their appearance such as lemon and pink grapefruit.

Finish
My first impression was a bit dry cocoa with some heavy spice and fruits with some floral note combined with a bit nutty bitterness. The finish was a good middle length one. It was quite liquerish on the end I found with some light milk chocolate notes.

Score
It was changing much when warming up the glass or giving it some time. Had some good depth in it and complexity. One to breath a bit but also slowly explore, but not for too long... Gave this during the tasting a good 7,5 out of 10.

So, now 2016. Lets again have a look at it. Nosing it I find some lovely creamy fruit notes, spices and different nuts. Powdered sugar, almond flour and some marzipan with orange freshness. Almost all the notes from earlier I can find again in it... Lovely dram, thanks for sharing it Werner!
Email ThisBlogThis!Share to TwitterShare to FacebookShare to Pinterest