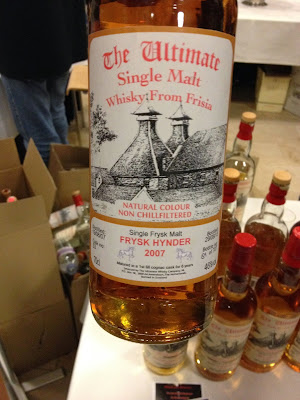 Had a quick nose and taste at the festival and was expecting a deeper flavor profile due to the Cognac influence. Had some of the original Frysk Hynder before, and was not blown away by their spirit. And hoped that this was going to be better. But sadly found it a bit flat, and lacking depth. I ask some people around me, and they also told me that this was not something to write home about sadly. Gave it a 6 out of 10 back then.

A while later Werner brought a sample over of a bottle he had so there could be another closer look at it and some more tasting notes. On the nose I find it to be a lot like wet cardboard at first mixed with some sour milk notes. Unripe berries, gooseberry and grassy notes. Hmm not off on a good start I am afraid here. The palate shows me also some very sour berry notes and (watery) vanilla, granny smith apples and sponge cake. Some raisins, canned mixed fruit juice, red apple, cassis and oranges are coming through that layer of berries. Not a very long finish and bit "woody" almost. Think my score stays as it is sadly. Thanks Werner for sharing it!
Email ThisBlogThis!Share to TwitterShare to FacebookShare to Pinterest